Bachata is a social dance originating from the Dominican Republic. In the past, it was mostly associated with lower class society, but since its international popularity it has grown more mainstream.

The version of Bachata that we are familiar with, characterized by the basic of three steps, followed by a tap on the fourth count, is typically Antillian style Bachata. The many possibilities in moves, steps and isolations makes it a fun dance with a lot of freedom for improvisation.

Bachata at the USC

More information about the dance classes at the University Sports Centre can be found here.

We hope to see you in the dance classes! 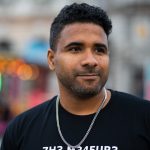 My name is Johnathan Hoijer and I’m currently the teacher of Salsa and Bachata at the USC Leiden. Before I came to the Netherlands, I grew up at Bonaire, Venezuela and Curacao. My first acquaintance with Salsa and Bachata was at house parties at the islands, where people went outside to dance together in the evenings. My first steps of Bachata was at a neighborhood party at Santo Domingo, where a number of Dominican acquaintances wanted me to I learn the basics, so that I could dance with them that same night. I grew up with Salsa music. My mother often played it while cleaning. When I was little, dancing wasn’t really my thing and I tried to avoid it as much as possible, but when I grew older and went to classes, I soon noticed I actually really liked it and I wanted to master everything. After having followed many classes, dance teachers asked me to assist. Since 2011 I give my own classes in Salsa and Bachata and I still enjoy it!